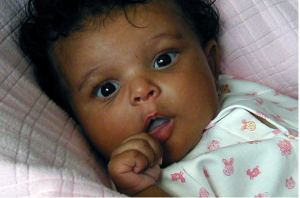 On September 10, 2004, a miracle found its way to us and an angel touched our lives.  Kyomi Linai Culpepper was born with a head covered in long silken locks and with gentle curly eye lashes so long that they seemed to wave to you when she blinked and looked up at you.  It was the first time in her parents’ lives that they truly and whole-heartedly felt bliss.  The moment was short lived and ended when Kyomi was taken away from her mom and dad and placed in an oxygen hood due to the low oxygen level in her blood.  Still optimistic and overjoyed her mom and dad made preparations for her homecoming.  Kyomi was showered with gifts.  The day of the family’s scheduled departure from the hospital the results of a final blood test came back.  There was an abnormality with her kidneys.

For four months, Kyomi and her family went through a roller coaster of hopes and let downs.  Time after time, Kyomi defied the doctor’s predictions and gave her family new reason to hope, until she finally succumbed to multiple organ system failure, sepsis, and kidney failure.  She valiantly clung to life until her condition was such that the doctors had to inform her family that if allowed to go on, she would only suffer.  So the family was forced to allow the machines to be turned off and watch as their precious angel slipped away.  On January 7, 2005, Kyomi Linai Culpepper and her family lost a valiant fight.  Though her life was short, she filled all of those blessed enough to know her with strength and hope.  The family holds Kyomi in their hearts, dreams, and prayers forever and they will continue to find comfort in the fact that she will be a part of them forever.

It is in Kyomi’s memory and with her spirit that her family set out on a mission to help other families in distress.